On July 24 2019, A Jinotega man reports an alarmed child in fear of violent armed Sandinista Police. In the image and video you can see that the child is  well dressed ready to go mass. A child reports that many children going to Church to Mass in the small town of Jinotega were taken. They were dragged in the streets. The children were being kidnapped in the street. This child was saved but what about the others.

The following tweet by previous survivors of the Regime Articulo 66 reports:


One child witnessed the violent capture made by the Orteguista Police of six young people in the Sandino neighborhood in Jinotega. "They loaded the AK's that were going to shoot us," denounced the minor. Video courtesy #Artículo66#DerechoAInformar 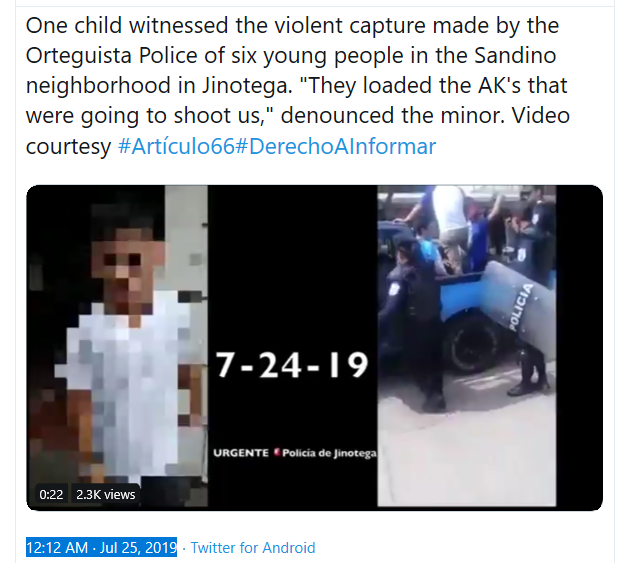 ( July 26, 2019 5:30 am UTC) The tiny country of Nicaragua that lies in the middle of Central America. A country with dozens of Volcanoes continues to be repressed from the Sandinista Ortegista Regime. The people on the street continue to be repressed where the children no longer have rights. Human lives continue to be lost and not respected. Yesterday a small child was on camera claiming that he was beaten by the Police in the streets of Jinotega, Nicaragua.


Today there are more reports of civilians seeing bombs thrown against the civilians in the Street. Around the world victims of the Sandinista Ortegista regime beginning 40 years ago,  pray for the people of Nicaragua. Read more on other similar topics "Human Crisis Sandista Terrorists"
http://www.megatrndz.com/search?q=human+crisis+sandista
April 28 2018 " Sandinista Thugs of War "


The students are asking for their rights only to be targeted by the Sandista Youth it is a never ending harassment. Freedom of speech does not go unless you are punished by maniacs on social media like elnicalegal. If you go to his online tweeter page you will find dozens like him trying to silence the youth future of Nicaragua. I have filed a report on twitter hopefully they will take that page down. If they do not then it will be an ongoing battle with the truth. Will social media be used as a game for riots and war against human dignity and lives or will it be the culprit to fuel chaos around the World. If elnicalegal twitter account is still up, we take that maniac online as an example of an ongoing chaos. If it comes down than twitter is doing the right thing. Terrorists and killers like the  Sandista Ortegista region should not have propaganda spread.

Will banning elnicalegal actually happen? Tell megatrndz what you think about social media being used in countries where civil war has existed.

10 hours ago the people from a town called Masaya hid behind Church walls. The following tweet was sent by the Alianza Universitaria Nicaragüense
Masaya's dignity is the soul that holds Nicaragua firm. Daniel sleeping and Rosario delirious are worthless compared to the energy of this town! Long live Masaya free!

At 7:38 PM · Jul 24, 2019 The Real Brave students claiming that they are student not deliquents.
At around 4 pm July 25, 2019 A sandista crook claims the opposite targeting the same individuals.


This is the type of people that need to be blocked online. Fake news, Fake images, If you see this online report to block images.