Human Crisis Trend : See to it That No One Misleads You Election Fraud Continues to be Fought in Court and by The Media

Human Crisis Trend : See to it That No One Misleads You Election Fraud Continues to be Fought in Court and by The Media

by Veronica Davis 2021-04-22
Megatrndz is now accepting donations online. Thank You readers for being supportive.https://www.paypal.com/donate?hosted_button_id=TN3RPCHKQB4RL
The Election Fraud trend of United States will go down in Historical Records. Prosecutions are still continuing to this day. American Election fraud has  been at its highest as people in the United States continue to call prior President Donald Trump as President. The irony in all of this, is the sentiment behind the American election continues to be fought in Court and by media.
One person will be charged for election fraud after  voting for other than themselves. According to writer Martin Walsh from the  Conservative Brief it reported on April 21, 2021:
The DuPage County State’s Attorney’s Office has filed felony election fraud charges against five individuals in connection with the 2020 general election.
According to the Illinois state’s attorney’s office, all five individuals are facing one felony charge of perjury in connection to the election code.
“The charges include counts of forgery and perjury in election code, all class three felonies. A judge on Tuesday signed arrest warrants for the five defendants, each with a $1,000 bail,” the report added.
In 2016, the county went 53.1 percent for Hillary Clinton and 38.6 for Donald Trump, and in 2020, similarly went 58 percent for Joe Biden and 39.9 percent for Donald Trump...
A judge on Tuesday signed arrest warrants for the five suspects, and each person’s bail was set for $1,000.
This is the second major case involving voter fraud.
A justice of the peace and three others in Texas were arrested and face 150 charges of voter fraud.
Jesus Christ said that Deception be at its highest the Disciples asked him:
What will be the Sign of your coming and the end of age
Matthew 24:3
Jesus Replied:
See to it that no one misleads you.
Matthew 24:4
Misleads in Greek means to wander off. Remember how Jesus Christ said that his sheep hear his voice and never go astray. This is found in the Ancient Book written by the Apostle John 10:27 and in Gospel written by Apostle Matthew18:12
American Christians are being targeted. One of them is Pastor Todd Coconato, he wrote on April 21, 2 2021 news for the Remnant Warrior:
Newsweek magazine had decided to do an article on me. This then led to many other Left-wing publications mimicking their article, but putting a more radical spin on it. I believe this all started with a hit-piece that was published in "Right Wing Watch".
Then we started to get a ton of threats and emails.
Some security challenges reached a little too close to home, which prompted us to be wise and take needed action to protect ourselves, similar to what happened during the election.
The Left loves to dox truth-tellers.
We have already had to move once. I can't tell you how crazy it all is. It can take a toll on you, if you let it. You don't hear about this kind of thing in the media, but it is happening to those who are out there and sharing the truth. Its a communist tactic.
We have decided to trust God. He is our defense.
I have become a target of the Left, as they don't like that I am a truth teller and bold enough to share what really happened with the 2020 election as well as many other things that are going on in our world that the mainstream corporate media simply will not report on. They hate that I stand for the FULL Bible and am pushing back against anti-Christian bills that the Biden Administration is currently championing.
We are on the front lines and taking a lot of flack. This means we are over the target! We will NOT back down!
We are still fighting for election integrity, alternative social media/free-speech platforms, standing for religious liberty, helping to fight against HR1 and HR5 and also pushing back directly against the radical leftist agenda in our schools and local communities.
We are also raising awareness to the major uptick in child sex trafficking under this administration. It’s hard to lay it all out, but we are busy to say the least.
Read Similar:
Election Fraud Trend: "MY GOD MY GOD WHY HAVE YOU FOR SAKEN ME"
by Veronica Davis 20221-01-08 10:40 AM
Source:
Five People Charged With Voter Fraud in Biden-Voting County
April 22, 2021 https://conservativebrief.com/five-people-with-38925/?utm_source=CB&utm_medium=ProTrumpNews


Todd Coconato Says Christians Don’t Believe Biden Is President Because God’s ‘Mantle of Anointing’ Remains on Trump by Kyle Mantyla |April 19, 2021 11:28 am
january7, 2021 Did it Really Happen? P1 by megatrndz

Human Crisis Trend Deception Trend The Eyes of the Deceiver

by Veronica Davis 20212-04-22
Posting Online with Measurements. Your mobility under scrutiny.
Surveillance Trend has been on the rise as Technology provides a means and way to follow anyone around without a need to expose who they are. It is like a Ghost following your every means.
icop is an acronym you may be unfamiliar with because it is making headlines such as in Yahoo News and Independent UK. The acronym may sound like you are spying on yourself.  So what does icop stand for. Try thinking about Internet Covert Operations Program. The Analysts are going through social media to report to the Government who are protesting.
The law enforcement arm of the USPS, the US Postal Inspection Service, is monitoring “inflammatory” social media posts and passing them over to other government agencies as part of the Internet Covert Operations Program (iCOP), according to a Yahoo News report.
Yahoo discovered the programme after obtaining a memo on 16 March marked as “law enforcement sensitive” that said USPS employees analysed “significant activity regarding planned protests occurring internationally and domestically on March 20, 2021.”
Who are the analysts.
Words like Analysts, Contact Tracers and other terms that could have an innocent meaning to humanities Liberties and Freedoms.  Where freedom to be mobile may one day be limited.
What will be the costs to the surveillance.
Online it states how they go after people who are already have criminal activity so targeting an innocent bystander and making them into a suspect just so that they can do surveillance would put your liberties and anyone s liberties at risk. This is something that is already taking place with covid19 contact tracing.
Take for example in Canada what is happening today.  You can sit in a restaurant in Canada so long as you are giving up your privacy. In one case I was a target from Tim Horton, a coffee Shop. The cashier yelled at me asking me for my identification card or license. Giving up your private legal documents to a cashier means we are giving up our rights to just any regular citizen.  Who defines government officials and how they play a role in society. What government official authority can and who they can be.
Also simply giving up your name and phone number just to sit down at a restaurant means that we are already submitting to numerous legal rights. It is saying you have the potential to get a disease that you may  never get. Also mobility rights have already been parts of the Charter rights and Freedom in Canada. Take for example in section 6 it states:
Provision
6. (1) Every citizen of Canada has the right to enter, remain in and leave Canada.
(2) Every citizen of Canada and every person who has the status of a permanent resident of Canada has the right:
to move to and take up residence in any province; and
to pursue the gaining of a livelihood in any province.
So it is not just Protesting in the Street a means a way to surveil on you but may make you a target. What if you are walking on the street in the middle of a protest would that make you a target.
Even with the Inter provincial travel that is occurring in Canada where the police can refuse people from enter a province unless it is essential travel is against the Mobility Rights.
As part of the Mobility Rights, it gives Canadians the rights for a passport. This means that creating a vaccine passport means that it is already a term that never has existed. Adding one definition to a term is already infringing in the law of wording, if there is such a term. But part of fighting the law, is also fighting how the words are created. What it is defined. It can only be defined by a Judge. A judge can not make something that is not in writing. A crooked judge can mislead lawyers or the victims to get what they want. But they can not change anything that is already in writing.
Such as written in The Canadian Charter of Rights and Freedoms the analysis off section 6 The Mobility rights, it states word by word:
(ii) Section 6(1) and the right to a passport
A majority of the Supreme Court stated in obiter that the requirement that citizens present a passport to enter Canada would not be an infringement of their mobility rights since the passport serves to identify those who can exercise the rights of Canadian citizens. The court went on to suggest that an unjustifiable limit of the Charter may arise if this requirement can only be met with great difficulty or expense (R v. Nikal, [1996] 1 S.C.R. 1013, at paragraph 96).
Therefore the word passport would have to be changed to vaccine passport  which does not exist. So this part would need to be contested in order to fight the vaccine passports that would to be enforced in 2021.
So According to Canadian law Bora Laskin Law Library states :
In the common law in Canada, judges must follow the principle of stare decisis, which requires that judges follow the previous rulings (i.e. precedents) of other judges in higher courts in their province or territory and the Supreme Court of Canada on the same issue. Decisions from the same level of court or other provinces or jurisdictions may assist judges in reaching a decision. The body of case law is comprised of these decisions. 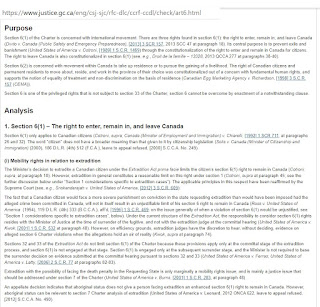 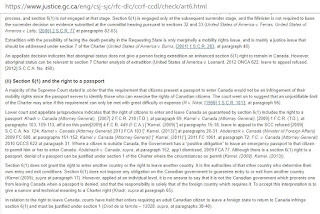 Draconian Measurements They are COMING After our BEHAVIOUR 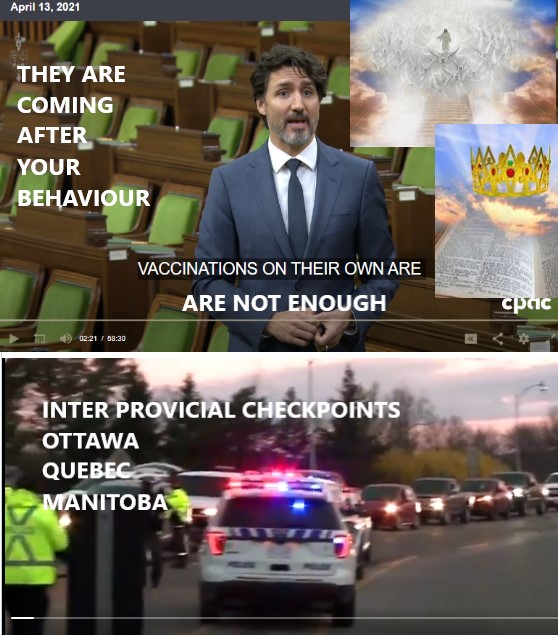 It was a time where the Roman Empire had authority over all the Kingdoms. Satan empire was present on Earth. No different than today. Jesus Christ taught his believers to have power over the wicked:
"Behold, I have given you authority to tread on serpents and scorpions, and over all the power of the enemy and nothing will injure you."
Luke 10:19
If you are one of those following the twitter hashtags you will be familiar with these ones:
#TrudeauMustGo
#TrudeauFailedCanada
#TrudeauWorstPMEver
#TrudeauVaccineFailure
#FireTrudeau
#TrudeauCorruption
#TrudeauCOVIDColludingPM
You want my opinion, While there are reports of surges happening, all I see are happy people enjoying fresh air with out a mask over here. So depending where you are in this World you choose to accept the  whose truth the one of the serpents or the one set by Lord Jesus Christ.
Sources:
The Sacred Bible
Twitter
https://www.cpac.ca/en/programs/question-period/episodes/66345331/?jwsource=cl
Ontario a police state, 1st Amendment under Attack in Biden’s America, Coup in Belarus Fails & more! by the Convo Couch https://youtu.be/ruluck3FrAk

Thanks to the Millions of Worldwide readers! Subscribe today..Creating the Pilgrimage Road a word at a time