Hey Megatrndz subscribers! Megatrndz.com loves all readers. please make sure to follow also twitter, facebook and youtube as well. Megatrndz.com would love to hear your opinion so pop by the website and drop in a word on the topic at hand or insights. God Bless!

It happened around 8:30 pm reported on social media. Dogs began barking first. Then people felt the boom but seismic activity is not unusual.
Today on the megatrndz show : President Donald Trump Cares whether Jerusalem is the Capital of Israel. Why is it so important for President Donald Trump and the World. What are the mysterious booms heard in Arizona, and worldwide. Are they military weapon sounds? Are they meteors making streaking sounds around Space? Are the sounds occurring within the mantel of Earth's Core? The megatrndz show is hosted by veronica davis join the discussion by leaving a message online on the website of what you think is making the fireballs. Seen anything strange on the celestial sky reported on the comments box below Unexplained Loud Booms Rattling Houses Puzzle Southern Arizona 194 views NowYouKnow Published on Dec 1, 2017

Ground Shakes and Gun Shots what exactly are we analysing coming from the Heaven's. Many times these mysterious sounds are unexplained. Obviously it is not one's own imagination as the strange sounds are reported my many.


Evangelist Anita Fuentes Streamed live on Nov 29, 2017 Trump Has Less Than 48 hours To Announce US Embassy Move To Jerusalem or Not - What Will Happen Next 6,787 views 250 8 SHARE

Are we experiencing Angel Wars from the Heaven's above. A spiritual warfare unseen to the human eye. To receive recent trends around the world , subscribe to megatrndz on twitter simply click on megatrndz below


What were the mysterious fireballs coming from the Heaven's. The American Meteor Society reports Meteor Activity Outlook for November 25-December 1, 2017


On November 26, 2017 According to the American Meteor Society there were over 41 reported meteors in the United States alone between Texas and Oklahoma Border. 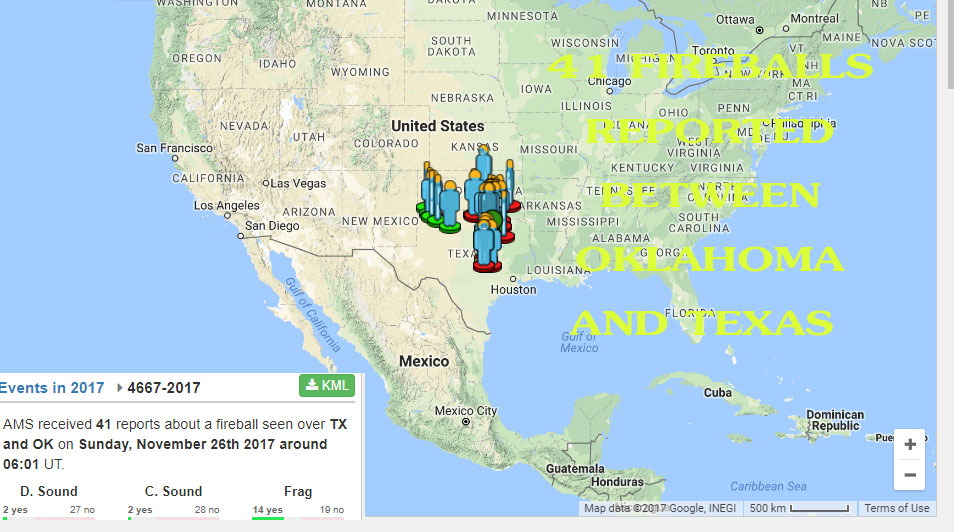 On November 25, the Scotts News did a report about a man named Thibaut Alexandre ...Read more on this mysterious celestial trend