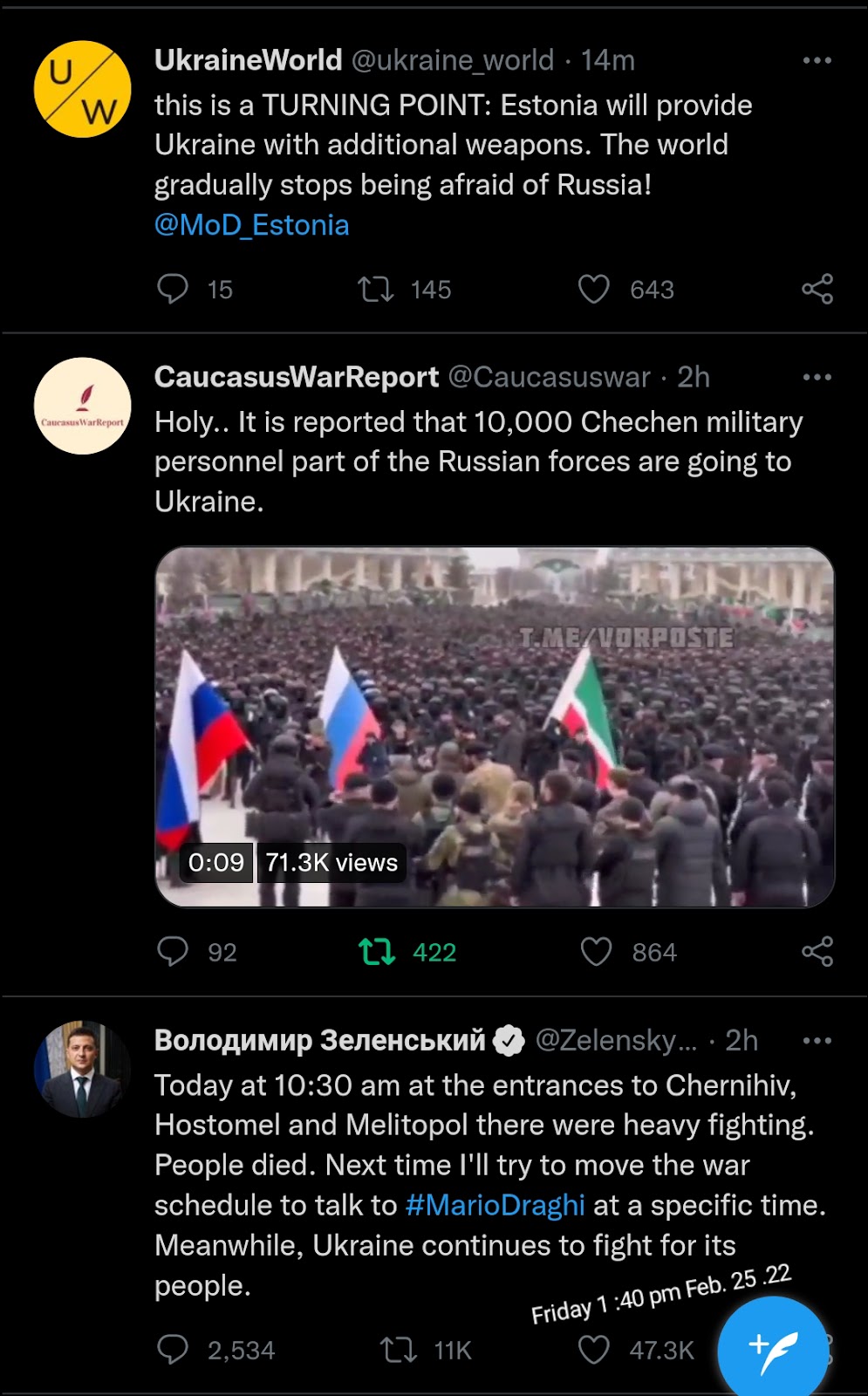 Today DW a german public broadcast reports Ukraine soldiers is fighting russian troops on ground outside of Kyiv, ukraine. https://youtu.be/rjIMknuz-2g
Ukraine Refugees Drafts
Why are troops not going to Ukraine. Is it fear. While most Ukrainians are running desperately out of targeted zones which is almost in 8 cities some have to stay. Males between ages 18 to 60 have to fight for their country. Most have no experience. UN says over 5 million will flee Ukraine. Ukraine refugees are at Romania border https://youtu.be/kGyIhcpda7M
Chernobyl
While yesterday there are reports the Russia is taking over Chernobyl it is hard to say why. Some say chernobyl is the easiest route to Kiev. There are reports of high unusual radiation there too since russian presence.
Fallen Soldiers
Yesterday over 15 ukraine soldiers died at Black Sea at an island called  snake island. Heroes. Social media has politicians writting war sendiments of heroic actions by fallen  since the russia chaos started. Like Florida's Marco tweeted today an hour ago Marco Rubio@marcorubio:
The courage,strength & determination of the people of #Ukraine is inspiring the world,revealing the moral laziness of many in the West & exposing #Putin’s sadistic criminality
An hour before, President of Ukraine Володимир Зеленський @ZelenskyyUa tweeted at 1:35 pm Ukraine time or 2h ago:
Today at 10:30 am at the entrances to Chernihiv, Hostomel and Melitopol there were heavy fighting. People died. Next time I'll try to move the war schedule to talk to #MarioDraghi at a specific time. Meanwhile, Ukraine continues to fight for its people.
Anti War Protest
Yesterday, 1800 arrests have been arrested in Moscow Russia as anti war residents took their anger to the streets.
Alec Luhn @ASLuhn a telegraph reporter tweeted today:
Riot police in Moscow today (at least 1,853 people arrested at antiwar protests around Russia yesterday)
Perhaps it is just better to be still at home till all of this dies out then end up in jail as enemy of the state. Which is probably worst than the little freedom they have.  Better some then none. Desperation does nothing to the soul.
Prophecies
Maria de Luz weitting has said before that war will be short.
POW
Yesterday Russian Pow or prisoner of war  soldiers are also being caught lost of simply captured. Russian medic video decorded asking for directions.
European Troops
Why is no one helping Ukraine? Today British soldiers arriving in Estonia. https://youtu.be/rjIMknuz-2g
After Nato laid its plans so did US President Biden:
NATO announced its plans, U.S. President Joe Biden also confirmed he will not send any forces into Ukraine. The U.S. has about 90,000 troops already stationed in Europe, most of which are based in Germany, and will deploy an additional 7,000 troops to Germany this week.
“If [Russian President Vladimir Putin] did move into NATO countries, we will be involved,” Biden said Thursday afternoon. “The good news is NATO is more united and more determined than ever.”
Yesterday, In a tweet President of Ukraine said he has spoken via phone to Pm of canada. Володимир Зеленський@ZelenskyyUa· 20h ago:
Phone conversation with @JustinTrudeau 🇨🇦 Today there is a full-scale war throughout 🇺🇦!  We demand the immediate imposition of additional tough sanctions against Russia. Now, more than ever, we need concrete support! I count on leadership of 🇨🇦 in this process!
Source: https://time.com/6151115/nato-russia-ukraine-article-4/