PM of Canada or The King Maxime Bernier Sets Precedent at Forks Market?

PM of Canada or The King Maxime Bernier Sets Precedent at Forks Market?

Maxime Bernier is the leader and runner for Prime Minister of Canada. I called him My Prime Minister and another presenter called him The King. He called everyone Freedom Fighters. Yesterday Maxime Bernier visited the People of Winnipeg at The Forks Market a location where the Red River meets with the Assiniboine River.  He started of his speech with reminding the Winnipeg People who no longer is in power and the reasons for his arrest last time he visited Winnipeg. He was talking about the NDP Government leader Brian Pallister, whom Maxime blames for his arrest.  He spoke about how the Government wants to divide us by Vaccination stages. This will bring segregation and discrimination in Canada. The PPC and Maxime Bernier's vision is to keep Canadians united and oppose this new imposed  Government agenda. 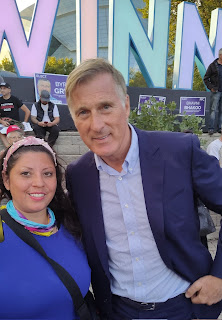 From the moment PPC leader Maxime Bernier stepped into the Forks Market and Scotia Bank stage  field, I began recording. Eventually I got a chance to greet him and take a photo with Maxime Bernier. He was genuine, friendly and exited to meet everyone there. I felt the difference when I was present when Prime Minister of Canada Justin Trudeau was present on August 20, 2021. The area was closed off to public, filled with Police  and PM Trudeau was not present to greet anyone. 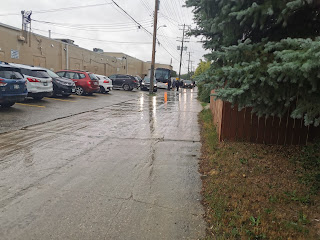 Then they were doing racial politics and now they want to divide us by our vaccination stages.  We are saying no to that because we do not want segregation or discrimination. We want to unite Canadian Under the Freedom...

..to be able to decide freely  if they want to get the Vaccine Passport or not. And we respect everybody. All the Canadians that decided to have the Vaccine. We respect their decision but we must tell them

The virus does not care if you are vaccinated or not.

Now you have a Government the leader of the Liberal Party Justin Trudeau and Erin O toole that is  telling you that you must impose a vaccine passport  all across the country  and it is there right now in Quebec in my own Province. It will be there and they tell you it is coming all across the Country because Justin Trudeau said he will give a billion dollars that we do not have to be sure that Province will impose vaccine passport. ..What we are telling them (crowd boos) Canadians who decided to have the Vaccine. Do not forget your passport has an expiration date and the expiration date will be in eight months or before that when another government will tell you .. you need the third shot or the fifth one, because it will happen. You know the Government bought for sixty million dollars the booster shot. So that was not the deal in the beginning. So more people are coming because they do not want to leave show me your papers so that is what is happening in my own province..We do not want that. Erin O Toole and Justin Trudeau and all other politicians they are the same. Every one of them are ready to impose a vaccine passport. And I can tell you more people are listening and they are looking at us. They do not have their courage of their conviction and because you out their right now they are looking at you. You are given them the courage to fight to stand up and speak out for their right and their freedoms. (Crowd applause) And I love this country I am doing politics..to fight for you Canadians and to put our country first  but right now we need because when tyranny because law revolution because  our duty. It is our duty because we have a Prime Minister right now and the leader opposition Erin O Toole that  saying to Canadians if you do not take your two shots Justin said that to the civil worker to the ..if you do not take your two shots  you do not have your vaccine passport their will be consequences. That is what he said I will punish you if you do not take your vaccine passport. We do not want that. We will punish you the 28th of September . (Crowd cheers) We will always stand up for what we believe in openly with passion and conviction. That is what I am asking you today.  I can not count on the main stream media. They do not want me and the main establishment politicians also.  They do not want us to be on the national debate because they know, (crowd boos) because they know what we are saying is powerful. And they know if I am not there  that will be a real debate. Now it will be a conversation with politicians that share the same views in this country.

They want to balance the budget. They want to sign the Paris Accord and they impose carbon tax on us . They are all the same. They believe that the UN and all these international organizations must tell us what to do in this Country. We are the only political party that will fight for our sovereignty. We are saying to the UN...We are putting our country first.

Only two weeks to flatten the lies. They were telling us that everything was based on science. But we know now that we have the data and the statistics  on our side and we know now that that virus is very dangerous with older people.. but if you are under 16 your chances from dying from covid  are less than one percent.

POLITICAL REPRESSION here in Canada.. It must change for the people @MaximeBernier #PPC #forks #manitoba pic.twitter.com/oeJQQg3whi

He is passionate to Win in 2021 early Canadian Elections as he continues in Manitoba Today.

Leftists always had a soft spot for violence. Trudeau and Singh praised a communist mass murderer and they’re fine with that.

But when we push back against the systematic attack on our rights and freedoms by this leftist psychopath, they say WE are dangerous??!

The PPC’s policy on internal trade has been updated. You can read it in its entirety here👇

Seeing vs Perception during a Pandemic of 2021

Jesus Christ was saying to them:

"To you has been given of the kingdom of God, but those who are outside get everything in parables

so that WHILE SEEING, THEY MAY SEE AND NOT PERCEIVE

AND WHILE HEARING, THEY MAY HEAR AND NOT UNDERSTAND,

OTHERWISE THEY MAY RETURN AND BE FORGIVEN."

And He said to them, "Do you not understand parable?

How will you understand all the parables?

"The sower sows the word.

comes and takes away the word which has been sown in them.

[places], who, when they hear the word, immediately receive it with Joy;

and they have no root in themselves but are [only] temporary; then,

with affliction or persecution arises because of the word,

immediately they fall away.

"And others  are the ones on whom seed was sown among the thorns;

these are the ones who have heard the word,

but the worries of the world,

and the deceitfulness of riches,

and the desire for other things

enter in and chocke the word,

and it becomes unfruitful.

are the ones on whom seed was sown

on the good soil;

and they hear the word and accept

it and bear fruit,

are the ones on whom seed was sown on the good soil;

and they hear the word and accept  it and bear fruit,

thirty, sixty, and a hundredfold."

And he was saying to the

to them, "A lamp is not brought to be put under a basket, is it or under a bed."

Is it not [brought] to be put on a lampstand?

For nothing is hidden except to be revealed'

nor has anything been a secret but that it would come to light.

If anyone has ear to hear let him hear.

And he was saying to them,  "Take care what you listen to.

By your standard of measure

it will be measured to you;

and more will be given to you besides.