If you think you are being targeted it is because you are. In the past year the targeted trend has sky rocketed and that is because the crime has gone up worldwide. There is enough people targeting one another as groups and organizations become opposed. The world is going through a new dark phase of change that we are not prepared for. But I have learned over time that the one true love that will never abandon you and will never change is God Almighty Jesus Christ.

When times get rough it is important to have God Almighty Jesus Christ always close to mind.  A little over 24 hours ago a building in  Surfside, Florida has mysteriously collapsed. It happened close to midnight on June 24 2021, and clear video footage shows it dropping down just the same way as the 911 attack.

The Florida Surfside building is located in a Jewish Community. A hundred people are missing and some dead. The news circulating this tragedy is showing little distress signs from people just to lower the shock value.  While other news reporting  have some people connecting it to what they call political assassinations. It all happened just a day before where at a jail cell in Spain a man named John was found dead.

What really made the catastrophe even worst was watching the news report and seeing little to no emotional response to the losses of humanity in this tragedy. But the tragedy goes even further when it may have connections to targeting humanity in the most lowest way.

Just a day before the Florida tragedy  a man named John McAfee is said to be a targeted political assassination according to Texas very own A.Jones. Jones has made the connections with other tragedies such as the other man  also targeted named Christopher Sign.   John McAfee was the founder of antivirus software company and was found dead of a suspected suicide in his prison cell in Barcelona on June 23, 2021.

As it continues to  circulate how John McAfee was killed due to him having evidence against the Deep State. Snowden also mentions John McAfee yesterday. John was a resident at the Mysterious Florida building that collapsed. John was holding  documentations there. According to Canadian Chris Sky, he reported that:

The condo that "collapsed" in Miami just "happened" to be John Mcaffeys condo where kept the 31 terabytes of dirt on the government. I'm sure this is purely "coincidence" 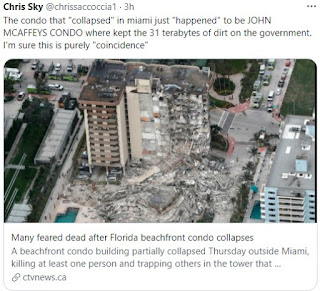 But what is even more eerie is how on same day of June 23 2021 a Pedestrian Bridge Mysteriously Collapses Onto DC Interstate .

The fact that all of these tragedies happened during or near a Full Strawberry Full Moon is clearly some kind of chosen dark deep state date.

Should we blame this tragedy to a mysterious bad luck strawberry full Moon or is this just a sinister plot of a war plan.

Some believe it is the ending of the Radical leader couple Daniel Ortega and his wife. In the past two weeks many illegal arrests have taken place in Nicaragua. With four  Presidential candidates have been kidnapped illegally and are now in prison, Felix Maradiaga, Sebastian Chamorro, Cristina Chamorro and Arturo Cruz. As well as Lawyers of Presidential Candidate. Since 2019 there has been more than 120 political imprisonments. These illegal arrests are getting international attention.

Secretary General of the OEA Luis Almagro has urged in a Letter to to the president of the permanent council of the organization  Ronal Sanders that they should activate the necessary mechanism of Article 21 of the Democratic Letter of the Inter-American. It speaks to Suspend Nicaragua as a member of the OEA.  On CNN, Ronald Sanders expressed that when the state of power is not exercising the Democracy than it is a Dictatorship he was referring to the Dictatorship of Daniel Ortega and his wife the Vice President of Nicaragua. Watch video OAS calls an emergency session this Tuesday to discuss the crisis in Nicaragua by Confidential