The Human Crisis trend has been occurring since the day Adam failed to tell eve about the serpent that was in the garden. Because he did not tell Eve, she went ahead and took the forbidden fruit. Out of the fruit came a child his name was Cain. Cain killed his brother and forever God Almighty would seven fold avenge anyone who would kill Cain. This mystery is one that only God Almighty knew about and perhaps this is clear why today. If we the people continue one battling against one another the battle will never end. God Almighty set a curse to anyone who would kill Cain not to protect the evil one's son but to end the war that God Almighty knew would not end. This is what we are seeing today. The continual never ending process of the evil seed planting the end of peace. 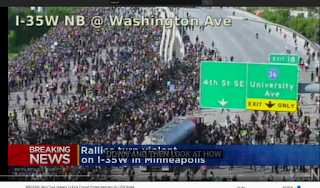 You will see it, when the Antifa people say, there is no peace without justice. The truth is that justice will not be set on Earth by anyone, it will be determined by the Most High Above. Yesterday President of the United States is labeling the Antifa group as a terrorist group.

Because my intentions of megatrndz is just to spread the truth and really promote other that need the credit I urge you to watch two videos by Leo Zagami and Infowars Alex Jones. They have been explaining how in the past years George Soros has been funding the political world wide domination of the socialists and communist groups that are now rioting .


This is why the God Almighty guided to start this channel and website which has been getting worldwide recognition yearly. But I hope all of have been reading my ebook which will be made into hard copy in the next few days. The Word of God Almighty Creator of Heaven and Earth is the reason we are here, he has protected us and delivered us away from the Evil One. Until Next Time I am Veronica Davis today it is May 31 2020 thank you for listening to Megatrndz.
https://www.youtube.com/playlist?list=PLX14yE2zd8xPmaTPV0SALNOg0JeSXJy9-
On camera Antifa PAYING young protesters to destroy American cities! by Leo Zagami