Fashion Color Trend: The Meaning of  The Trumps and the Royalty Fashion Choice June 3

(2019-06-05) While the World is falling into confusion in the Middle East, the American Trumps three day visit with the British Royals was something from another world. They say appearances make a huge impression. So what does it mean when two powerful dynasties meet constantly wearing white. What is truly behind the Color Coding and the Trumps. Even though, the most popular event televised on June 3, 2019 is considered a white tie state  banquet; is it really all white.  Or do the colors mean much much more. The white gowns was simply a matter of choice.

It was a beautiful scene watching the British Royals and the  American Trumps parade through their guests as they approached their final destination at the Royal Palace Head Table. 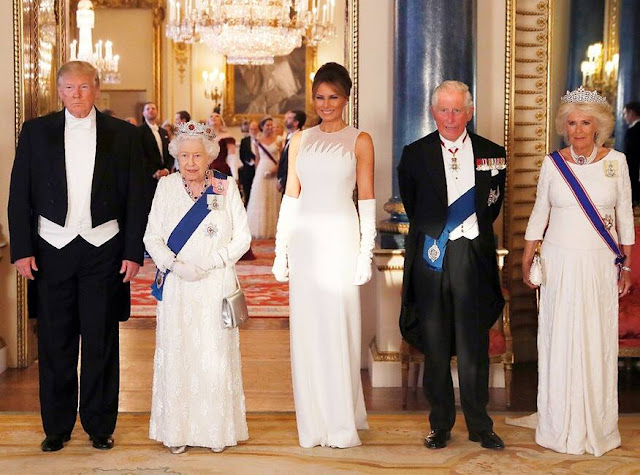 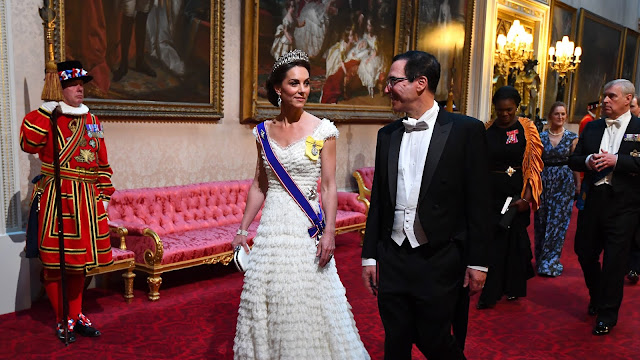 Princess, Duchess of Cambridge, Kate a white Alexander McQueen dress with her Dame Grand Cross of  the Royal Victorian Order blue Sach, the Lover s knot diamond and pearl tiara which once belonged to Princess Diana a gift given by the Queen in 1981 and Queen Mother sapphire  and diamond earrings.

The symbol of white means Peace. So this is a sign of a connection between the United States and United Kingdom sticking together when it comes to the future. This is a good sign for two Nations that have left their different in ignorance aside. In essence when nations stick together it shows loyalty and trust with each other specially at times of War.

Black
The Color Black was the coding when meeting the Pope in Rome a few years back. What we know is that the Trump Family has married into a Jewish Family, the Kushner. The wearing black meaning could mean that they are not in favor with the Vatican. If you are in list for the throne in the British Monarchy, consider not being Catholic as some have chosen the path and have lost it.


In November 2018, we saw Remembrance day attire in Paris fully blown out Black as the Political elites paraded their fashion through the streets of Paris under the Arc of Triumph. Soon after the yellow vest riots began in the very spot.


In all cases, it there  a symbolic meaning in political decision making, and color coding attire. It is  not just about the fashion.

(2019-06-4)   There is a war about the Holiest Holiday in Canada. One Egyptian store owner wants answers from the Government and is rallying his community against the Holy of Holiest Holiday in Canada.  On Good Friday 2019 the grocery store owner is angry over a fine given to him for opening on a Holy of the Holiest days around the World.
Canada has always respected different religions . Canada has always been of Christian value. Canada is still a baby country when being compared to a Christian countries like Spain and all of Latin America and South America.

So far Canada has kept the Good Friday as it respected the values of Jesus Christ Holiest Day. It sets Canada way up there when setting up the standards of what type of Country it is. It is a value many should respect. And then there was one little Grocery Store owner with strong beliefs other than Christians. The store owner for food fare grocery store has gathered over 10,000 signature from happy community members wanting to buy groceries on a Holy day. But the has yet to be understand what exactly the Good Friday Laws are all about.

The Winnipeg police says that they should not been fined but should receive a day in Court.

The hot debate about one Grocery Store in Winnipeg Canada not accepting the fact that stores should be Closed in Good Friday . The Egyptian Grocery Store  owner Zeid is contesting the Government over receiving a fine and opening up on a Holiday.

Because I think we are looking at a case of people who do not believe in the Christian faith, and Foodfare Zeid does not want to accept that there is a Christian Holiday in Canada, because they are from Egyptian backgrounds. Back in the time of Moses it was the Egyptians whom kept the Israelites under slavery... beliefs and customs still do not want to be respected ...this is a Christian Nation and the Government of Canada has respected that.. so the Fine is perfectly up to the Government... this is not about Fine but about RESPECT OF CULTURE AND FOUNDATIONS THE FOUNDATION OF CANADA

The Magistrate of Canada should consider religion and making the Foundations last when making a decision. It should not be about community but the roots. This is also about respecting one another s faith.