Starting 2013, A whole village gets unknown symptoms with what today they are calling 5G. Villagers  slept for days complaining of headaches, they were slurring words before falling into a comma state. Because it was close to Russian Uranium Mines to Kazakhstan, the Health Ministry claimed it was the Mines. But the Uranium mines had been closed for over 16 years ago. So why the mysterious brain illness.

Kalachi and other neighboring towns were victims of ?

Dozens of depopulated, dying or ghost villages in Northern Kazakh  province bordering Russia are being liquidated. 38 villages with less than 10 people will no longer

The characteristics of MMWs are different than the “low-band” (i.e., microwave) frequencies which are currently in use by the cellular and wireless industries. MMWs can transmit large amounts of data over short distances. The transmissions can be directed into narrow beams that travel by line-of-sight and can move data at high rates (e.g., up to 10 billion bits per second) with short lags (or latencies) between transmissions. The signals are blocked by buildings, and foliage can absorb much of their energy. Also, the waves can be reflected by metallic surfaces. Although antennas can be as small as a few millimeters, “small cell” antenna arrays may consist of dozens or even hundreds of antenna elements.

The village that fell asleep: mystery illness perplexes Kazakh scientists ..
The Science Behind The Mysterious Town Where Residents Fell Asleep For Days At A Time
https://youtu.be/Kd161qE-NeI

#5G what are they truly cooking? Building Inferno on Earth on Technocracy Part 1 of 4


#5G what are they truly cooking? Building Inferno on Earth on Technocracy Part 2 of 4

#5G what are they truly cooking? Building Inferno on Earth on Technocracy Part 3 of 4

#5G what are they truly cooking? Building Inferno on Earth on Technocracy Part 4 of 4 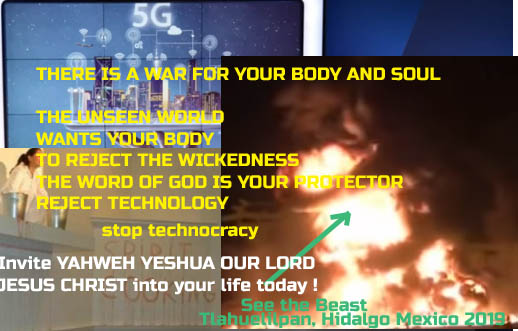 Spirit Cooking may not just be a disgusting ancient pagan ritual we have not missed their next disgusting move the spirit cooking on humanity of 5G. It is not too late to say no to advanced technology.

Best thing to do is to live in the country where there is fresh air and no big brother.

Are we living in the end days. When I see people running in flames all for a gallon of Gasoline tell me we are very close to the end days if not we  are already in it.

When you see the videos below it all starts quiet until total destruction takes place, through the inferno all i could hear were the voices of the living souls begging for their souls not to go through damnation.

How much did this people who lost their lives on January 18 2019 in Tlahuelilpan, Hidalgo Mexico actually value their lives.

If they would have had Yahweh Yeshua Our Lord in their Hearts they would not have put their owns lives at risk.

He did not give us more or less.
What we choose to do with our lives is all in our hands.
Who we choose to listen is also in our determination.
No one can force us to do anything that we do not choose to do.

So let us say that perhaps this people were deceived.

They were lovers of self because they chose to listen to themselves.
Even if there were danger signs.
The love for money.
The love for a little bit more.

The pipeline explosion let it be an example to not be lovers of self.
To be led by the Holy Spirit in everything we do.
Lord, Yeshua Jesus Christ guide my every steps even if i am by myself.

Help me Help others find you if they are lost.

These people were followers of social media.
One after the other, followed each other into the realms of the Inferno Hole.

With gas in their eyes, and fumes smelt from hundreds and meters away.
They still took their little bucket for that little bit of taste of free money.

While the military were close by they did not nothing.
So no matter what kind of deception they were living during those moments of excitement while they received they free money.
Human life should be cherished for what it truly represents.

So even if we are living in the deception era, and now the fifth wave  is already here 5G.
One must always choose Technology or Myself First.

So the reason why I started with the Mexico pipeline explosion with over 100 dead is that it is exactly what 5G is going to do with Human bodies. We are going to be living the same way the worst moments of this people's lives. Like the zombie like people walking  with their clothes torn to pieces with their clothes melted to their skin and not saying one word. Or like the ones running with flames. They claim that the 5G is like having your skin burn. It is only a matter of time whether we let them win.

Will you choose to be like the ones running with your gasoline cylinders to receive the free gasoline or will you refrain. We are the ones with the one and of switch. If no one follows the 5G leader this companies have nowhere to go but to bankrupt courts.

So this is just like two decades ago when plastic bottles was beginning to reach its height. Now the oceans are filled with plastic pollution. With plastic islands floating out in the Ocean. It is our choice what we do with our bodies. The body that Our Lord Jesus Christ gifted to us. Everlasting is earned while we play wise to the Beast System of Technology.

Companies  like SpaceX owned by Elon Musk just launched a rocket placing a new satellite right over us.

By 2020 cars are suppose to be driver less listen to Rick Wiles: Driverless Cars By 2020. With over 200,000 satellites have to be placed right on top of us all. And  the air to be sprayed  with enough chemicals to sustain the new technological agenda.

5G is a Sterilization & Eugenics Program ~ Deborah Tavares (5:00) Cooking of humanity. Is this what they call spirit Cooking.

So who is targeting this electrical transformers and Pipelines blowing up. Is it the enemy. Is it a secret space program doing the testing to something more. So even if a was a solar flare i am not sure if solar flares specifically target transformers or pipelines. Wildfires in California has received a lot of controversy as wild fire is not at all natural.

One question about technology. Does everyone in the world need it. Not everyone is crying out

Electrical Transformers are Blowing Up Worldwide

Tlahuelilpan, Hidalgo Mexico 2019 Was it a sick ritual? Were this hundreds of people meant to be burnt alive? It was filmed for the world to witness? Who is behind it!