What happens when the Company You Work For does not want to take its safety parameters when it comes to natural disaster zones?


What happens when the Company You Work For does not want to take its safety parameters when it comes to natural disaster zones? Disney Cruise is under scrutiny!


(9-3-2019) What happens when the Company You Work For does not want take its safety parameters when it comes to natural disaster zones?

It is a very important question to be asking yourself, specially if you are traveling in a disaster zone. Is it the government's responsibilities or the company's?

On September 1, 2019 In one tweet Kim Prunty, vice president of communications and public affairs for Disney Cruise Line, responds to Mr.Green a concerned family member of a co worker of Disney cruise. Kim Prunty @KEP77 tweets:

1/2 Meg, I work for DCL and understand your concern, as they are our co-workers. Castaway is south of the more significant weather. DCL is in regular contact with island leadership and all are safe. Forecast calls for tropical storm force winds, which is what is there now.

Not sure where this vice president got her weather information. If on September 1 Governor in the Eastern coastline of the United States were evacuating millions of people how is it that a Disney vice president is calling it a tropical storm?


A few days before hurricane dorian hit, Disney cruise news announced  on august 26, 2019 during the 2019 D23 Expo in California, Disney Cruise Line  the name of their fifth cruise ship along with some other fun details, plus revealed plans to develop a second private island in the Bahamas. So will this new announced leave speculations of what if there is another hurricane and how will the company learn from the hurricane dorian and how they treated their employees? What about their guests?
Related Disneyland topics 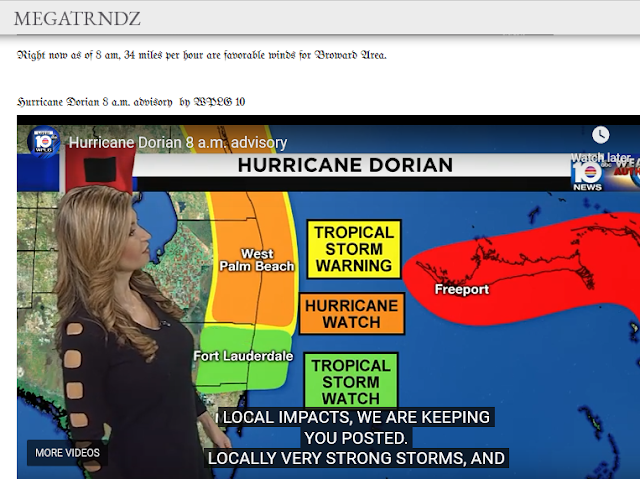 (Tuesday September 3, 2019 8:00 am) After smashing steady for hours into the Bahamas hurricane dorian seems to become a tropical warning as it is on the Fort Lauderdale  Atlantic coastline. Mandatory Evacuations were ordered three days ago not knowing which direction the eye of the storm would hit Eastern Florida's Mainland or North Coastlines. Meanwhile in South Carolina a Capitan Jason Strong dedicates his speech to God Almighty during the Emergency Evacuation speech yesterday. So far, South Carolina could be spared due to the winds dying down to tropical watch as it is approaching Fort Lauderdale on Tuesday September 3, 2019 at  5 am. 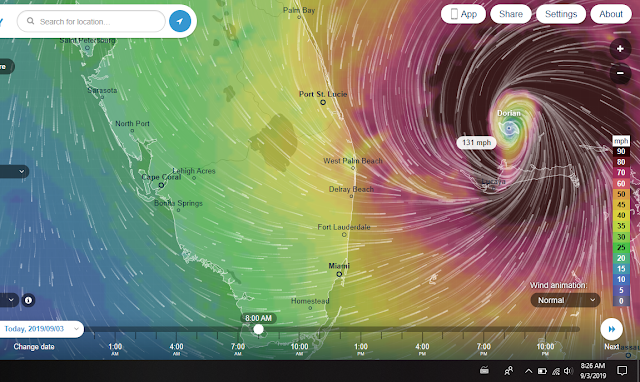 As of September 3,2019 at 8:30 am Hurricane Dorian Eye of the Storm is still off Lucaya in the Atlantic Ocean Point St. Lucie is 15.2 km off the eye of the storm. Port St. Lucie is 5 meters of Altitude 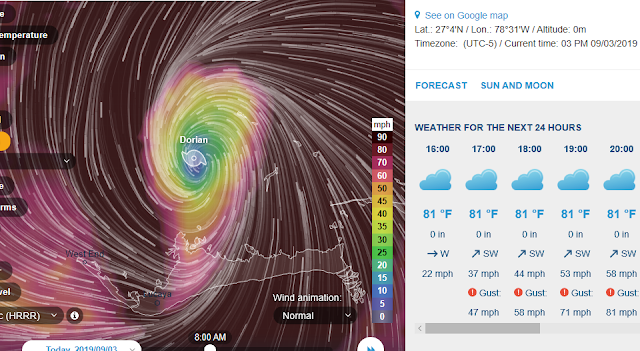 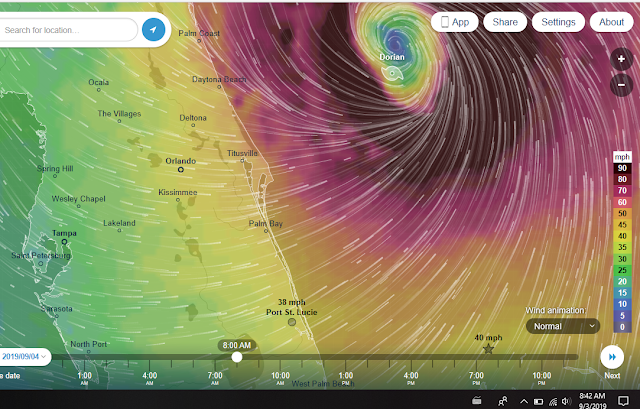 Right now as of 8 am, 34 miles per hour are favorable winds for Broward Area.

While hurricane dorian is pounding the Bahamas there has been a number of 5 deaths in Abaco and over 13 thousand homes damaged. Thousands without power.


One frantic situation that has gone worldwide viral is where a four month baby and a woman are trapped in the eye of a storm in the Bahamas yesterday. Supposedly the video was posted on September 1 2019 shortly before the aftermath. Since it has left me asking questions? Is it staged? Is it a miracle that the video has been posted online supposedly the hurricane has left the Bahamas powerless? Is it a miracle that the internet still worked during and after the Hurricane category 5 while it it Bahamas? So far the prime minister has said that it is the worst day of his life.