An hour later Russia  in the area of Ozemovskiy has a 4.5 magnitude Earthquake. Today there were several deep earthquakes never seen before in Alaska.
At around 16:01:44 UTC at 37km WNW of Redoubt Volcano, Alaska a 1.7 mag 152.0 km depth. See #1 in Deep Earthquake Trend photo below.
Steaming was active summit lava dome of  the Redoubt Volcano on May 8, 2009.
In April 21, 1990 eruption cloud to a height of about 9 km came from the Redoubt Volcano.
So the fact that the minor earthquakes near such volcano is becoming deeper can mean something significant. 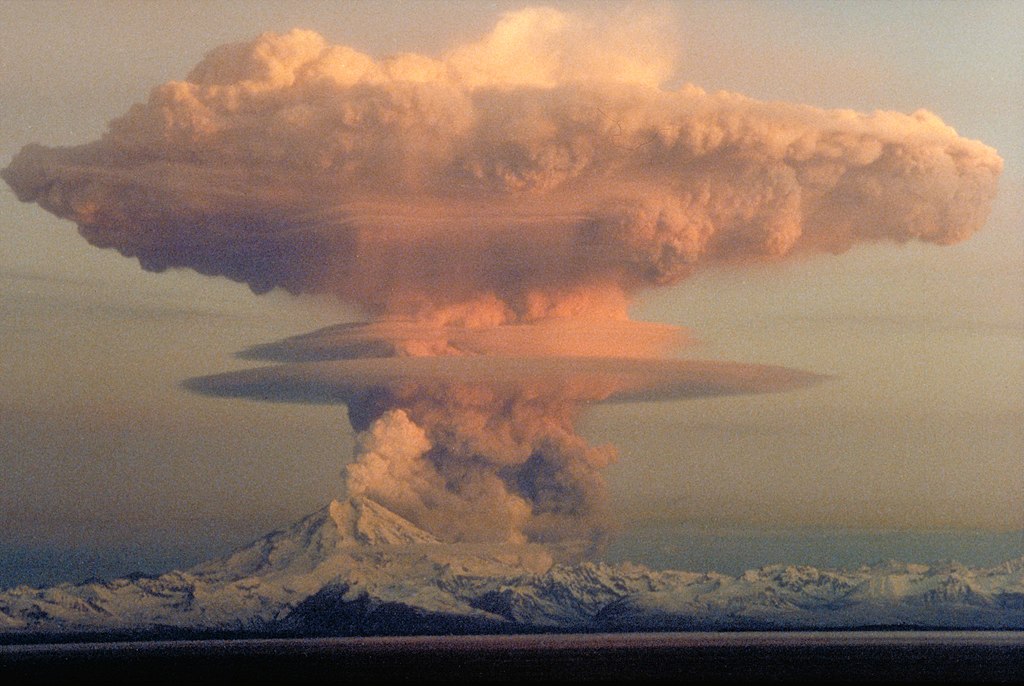 2. Another earthquake occurred  17:45:09 UTC 65 km of Anchor Point Alaska with depth of 91 km followed by a 1.5 magnitude but a deep earthquake of 115.6 km near Mount Old Liliamna or 81 km East of Old Liliamna, Alaska. See #4 Deep Earthquake Photo

A plume of steam and gas typically rises several hundred meters above the fumarole field.


There are also Fumaroles on Mount Redoubt in Alaska.
A fumarole (or fumerole – the word ultimately comes from the Latin fumus, "smoke") is an opening in a planet's crust, often in areas surrounding volcanoes, which emits steam and gases such as carbon dioxide, sulfur dioxide, hydrogen chloride, and hydrogen sulfide. 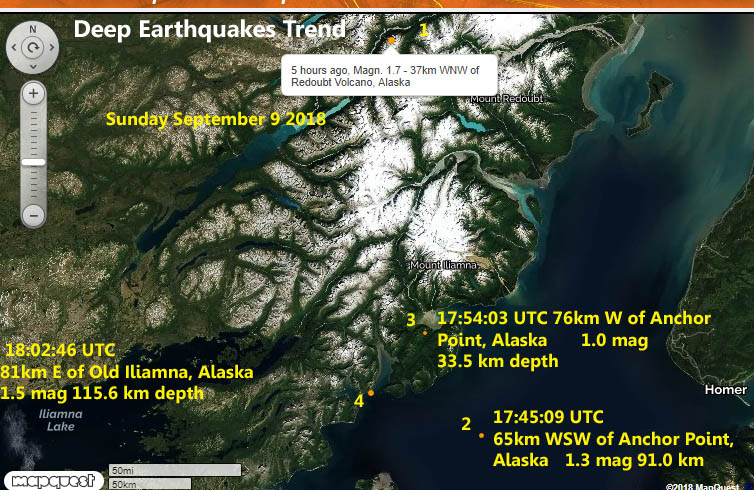 Climate Chaos: Japan's Constant Warning Before Big One on September 6, 2018

Beginning more than 14 days ago there were smaller earthquakes shaking near Japan starting from the Ocean. At the North Pacific Basin near an area known as the Kuril - Kamchatka Trench near the Kuril Islands numerous small earthquakes kept on shaking from the ocean. 4.6 magnitude earthquake 171 km from Kuril’sk, Hokkaido, Japan UTC time: Sunday, August 26, 2018 23:10 PM Your time: Sunday, August 26 2018 6:10 PM Then 13 days ago a 4.6 magnitude earthquake

Kuril - Kamchatka Trench earthquakes then moved towards the Japan Trench as it hit a bigger one towards Japan Land 10 day span.

Hurricanes and Floods
Mid Atlantic Storm strengthning in the Ocean. Tropical Storm can turn to a category 4 as Hurricane Florence makes landfall.

Virginia and Southern Carolina prepare themselves for a State of Emergency.

New York City has been warned until Monday September 10 of inland flooding.

After #typhoon #Jebi hit Tuesday September 4, 2018 and 2 major Earthquakes hit Japan. First major earthquake at Ibaraki, 5:11 a.m Japan time (M5.6) on September 5   than a bigger earthquake on Sept 6 at #Hokkaido , 3:08 a.m. Japan time(M6.7). The high winds and massive waves of typhoon Jebi hit Tokushima first. Other death toll affected areas were Osaka Prefecture and the others in Mie, Aichi and Shiga.Now death tall keeps rising to 37. More than Over one million people were evacuated. Japan has also suffered a heat wave since May killing 138 people.

One person tweets comparison of landslide after the big earthquake in Hokkaido:

03:08 JST M6.7 #EARTHQUAKE IN #HOKKAIDO, #JAPAN The photo on the left shows mountains in Hokkaido before today's earthquake The photo on the right shows the sitiution after the quake Reminds me of what I saw after quakes in Taiwan (1999), Pakistan (2005) and China (2008)

A powerful earthquake shook Japan’s northernmost main island of Hokkaido early Thursday. There are a lot landslides occurred by the earthquake. About this earthquake in English →https://t.co/tW7v1U2dnd #hokkaido #earthquake pic.twitter.com/k2YqoejNF2
— 読売新聞写真部 (@tshashin) September 6, 2018

Aerial photo of a #landslide along a long ridge in Atsuma town, #Hokkaido after a magnitude 6.7 #earthquake at 3:07 A.M. local time on 6 Sept 2018 that crushed homes & knocking out power in several areas across the island - Source: Kyodo News/AP pic.twitter.com/t0ojcHOyYF
— jaime s. sincioco (@jaimessincioco) September 6, 2018


Footage shows the moment a M6.7 earthquake hit Japan's #Hokkaido at about 3 am on Thursday local time. At least 1 person is dead, 126 people are injured and about 40 more are missing, NHK reports. #北海道地震 pic.twitter.com/msVuqEG7D8
— Global Times (@globaltimesnews) September 6, 2018


On September 7,  Yuxi, Yunnan China had a 5.6 magnitude Earthquake.

Texas heavy rains has killed a woman and a child.
Airplane Crashes

17 killed in an airplane disaster in Southern Sudan dipping into a Lake.  Out of the 20 people on board from the Juba International Flight one child survivies horrific crash.

Canada
Canadian deports over 217 North Korean defectors from 20 years ago. Canada claims those claiming asylum from North Korea but instead touched South Korean borders had been already given citizenship.  One woman is under dilemna whether to live her Canadian born behind as she will be seperated from the deportation.  These raises eyebrows as Canadian Government does not really have a Humanitarian Heart from those fleeing from Violent country like North Korea. Is not Canadian Prime Minister Trudeau doing the same thing that President Donald Trump is doing to the asylum seekers from Latin American Countries and seperating children from Parents.

Meanwhile, North Korea is celebrating a 70 year parade without a intercontinental being present. Perhaps United States President Donald Trump had alot to do with this small stepping stone into the North Korean regime changes from when he last visited with North Korean Dictator. Why Canada is doing this immigrant deportation move now  is unclear.

Syria
Turkey sends forces to Syrian border as airstrikes continues for weeks now. The Syrian Government and Russian military targets Idlibs on yesterday on Saturday. In Kirikhan, Turkey more fuel fears of bloody battle for Idlib. There are over 30,000 rebels in rebel held bastian. The United Nations fears a huge humanitarian crisis claiming the lives of civilian in Idlibs are over 3 million.  As airstrikes escalate in Pumel a weak comparison was made. There are more babies than terrorist one compared. Although the comparison is a weak argument it is like comparing oil and water. Ctv news Canada claim so far bombings have killed 4 lives one of a child.

Worldwide
International Global Activists marched worldwide with 95 countries participating. Marchers wanting a Rise for Climate Justice federally and locally. Hopefully the marchers are taking care of the planets and not helping out the Companies that use plastic packaging.  Hopefully actions speaking louder than words. One may concern of the people was Sea level rise. A suggestion to all activists, marchers and participants around the world, more action needs to happen helping out  by voting the Green Party for example if you are in Canada or political parties alike in your area. Also cleaning up the planet together and being more on the front line also helps further into changing the climate chaos today.

Breaking News: US and British Forces Trapped in Idlib Syria